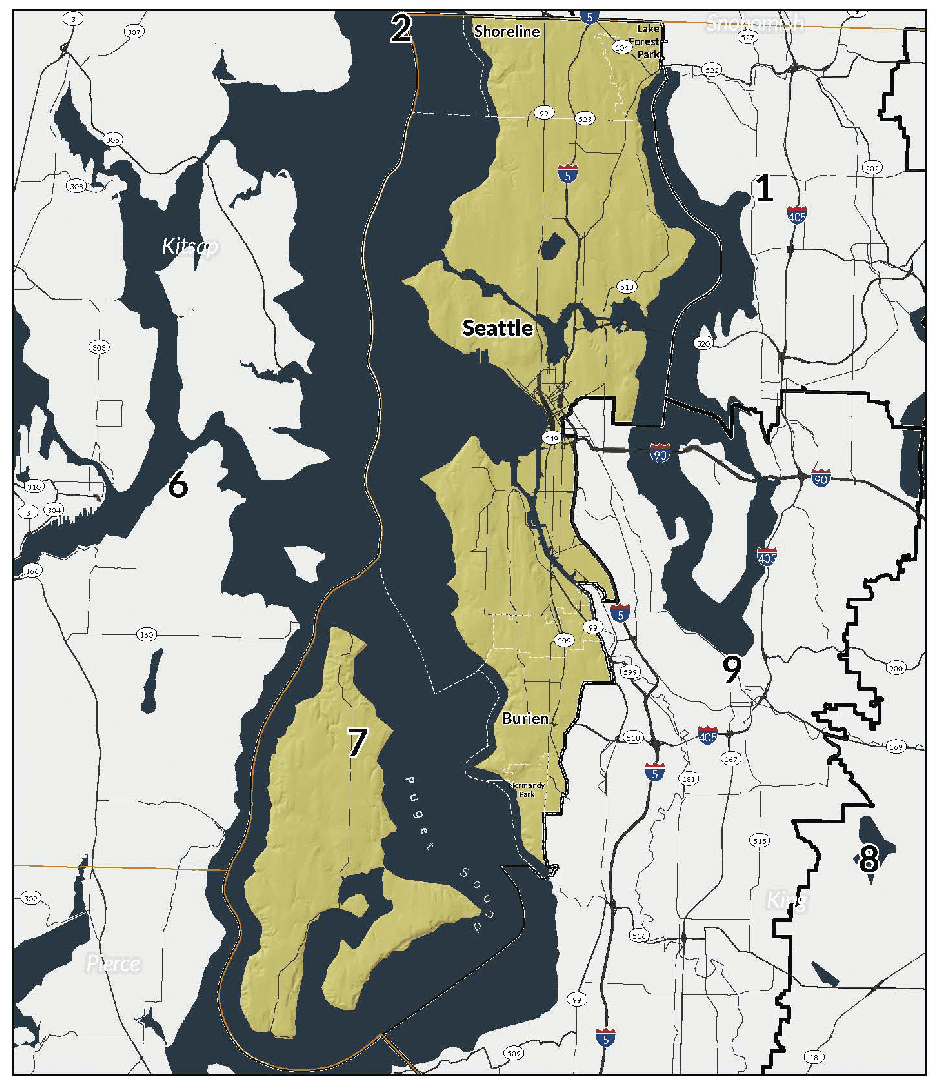 Last year, the Washington State Legislature adopted their amended Legislative and Congressional district maps based on 2020 census data. For those who are new, you can find out more about the statewide redistricting process by reading our “People Over Politicians” booklet, by scrolling to the bottom of the page.

Thank you to everyone who participated in our listening sessions and workshops or followed along in our Advocacy and Community Engagement monthly newsletter! Because of you, 2021 was a year of unprecedented public involvement in the redistricting process. However, the fight continues!

This year marks the first time in history that Seattle has a Redistricting Commission to redraw the city council district boundaries using the updated population data and public feedback. Districts are important for our communities of color because they determine our voting power, representation, and funding. Read below to learn more about the redistricting process, how to review draft maps for the new city council districts and express your communities’ desires in how they should be drawn.

Let's go over the basics

The first step in understanding redistricting it to learn the basics! Check out the tabs below for the answers to some frequently asked questions to get you caught up to speed!

The City Council members were not always assigned to a certain district; rather, they all served the city at-large. In fact, our City Council Districts did not exist until 2013. On December 4th, 2013, Mayor Michael McGinn approved the charter amendment to develop “a mixed system of district and at-large representation”, creating seven city council districts. The City Council consists of nine members, with seven members elected by their districts, and two members elected by the City at-large.

This was to make each city council member closer to the people they serve and ensure that voters can have a better relationship with their elected official.

Redistricting is the process of redrawing voting district boundaries, based on population. The redistricting process is used to ensure there is an equal distribution of voting power and representation in our legislative chambers.

This year, the Washington State Redistricting Commission will use the 2020 Census data to redraw the voting districts.

Why is Redistricting So Important?

Historically, discriminatory political practices, such as gerrymandering and redlining, have been used to manipulate district boundaries to favor political parties and wealthy people.

By dividing communities of color and low-income communities into separate districts, particular parties or groups gain an unfair political advantage. In result, these communities are left with little to no voting power and representation.

What Are Our Redistricting Goals This Year?

Our goal is to redraw districts to represent people, rather than politicians.

How do City Council Districts Affect Black and Other Underserved Communities in Seattle?

Anyone who has been here for more than 10 years would agree that Seattle, especially the Central District, does not look the same. Much of the Black community in the Central District had been displaced due to a long history of redlining, gentrification, gerrymandering, and discriminatory housing policies.

For example, the Urban Renewal Program, approved by the City Council in 1969, had displaced over 500 households and businesses in Seattle. Despite a significant population of Black residents, Seattle only had one Black City Council member that year. This means, without having a district, and a small percentage of representation in our City Council, our community had little to no voting power against the harmful code enforcements from the program.

How Can You Learn More about the Redistricting Process?

The City of Seattle created an interactive website for you to meet the members of the Seattle Redistricting Commission and to learn about the timeline and process of redistricting our city council districts. You can check it out here!

We need your help! Your input on this brief survey is incredibly valuable to the work our Advocacy & Civic Engagement (ACE) department is doing to bring awareness to redistricting impact within our community!

How Can You Get Involved?

There are simple but impactful ways you can get involved in the Redistricting process! With your voice, we can ensure that communities have equitable and powerful representation and voting power.

Stay in the loop for ACE Updates

Sign a petition to demand for more equitable public forums (like the one below conducted by our ACE department!)

Unless you’re a political science nerd, or a politician yourself, redistricting and city council members aren’t exactly hot topics.

Don’t know what district you live in? Don’t worry, we got you!

You can find your city council district and representatives by clicking on the button below!

Part of understanding the redistricting process includes knowing the key agencies, lingo, and references involved in the conversation!

A voting district is a geographic area used by the government to group voters. Think of each district as a grouping of citizens, who vote to be represented by one or two leaders.

Gerrymandering is the practice of manipulating the boundaries of an electoral constituency (ex: county, city, or country) to favor one political party or social class.

Two principal tactics are used in gerrymandering: “cracking” and “packing”

Cracking is the attempt to reduce the voting power of the opposing party’s supporters. Recent examples we’ve seen of this include imposing stricter voting requirements, reducing ballot drop-off locations, and attempting to eliminate voting by mail.

Packing is the process of forcing the opposing party’s voting power into one district to reduce their voting power in other districts. An example of this is when the majority of the large cities in a state vote one way, however, the outcome of the election goes the opposite way because several small districts (without influence from the majority) votes added up to outnumber the larger district’s votes.

Redlining is the systematic denial of various services to residents of specific, often racially associated, neighborhoods or communities, either explicitly or through the selective raising of prices.

Some examples of redlining include the denial of financial assistance services (like bank loans or insurance) for certain groups and not others; unaffordable, outdated, or inaccessible healthcare opportunities in certain neighborhoods; and even the deliberate act of building grocery stores and retail businesses being built impractically far away from targeted residential areas.

The Seattle Redistricting Commission consists of five appointed Seattle residents, who will be working with the most recent decennial census data, the redistricting rules laid out in the Seattle City Charter, mapping experts and public input to create a new City Council district map.

The Washington State Redistricting Commission is a bipartisan group established for the purpose of redrawing legislative and congressional district boundaries.

The Commission meets roughly every 10 years. During this time, members typically meet on a monthly basis until the redistricting process is complete.

Redistricting Justice for Washington is a coalition of organizations that started in 2020 to collaborate on census outreach and include people of color and historically undercounted communities.

Now, they’re continuing this work by ensuring that the redistricting process represents all Washingtonians.

Redistricting Justice for Washington has created a locally-focused campaign to fight for fair redistricting with communities at a local level in cities across the state that are going through a 2022 City Council redistricting process.

This year, their focus cities are Seattle, Yakima, Spokane, and Everett.

Did you know that the size of your district influences your access to vote, the collective voice of your community when addressing its needs, and even the outcomes of local elections? It’s hard to believe city limits and county lines could impact so much. That’s why it’s so important to understand how and when your district changes, the ways in which those changes will impact you, and who is at the helm of changing it. This process is called redistricting. And while redistricting is intended to promote equity and fairness within a democratic system, there is a dark side to it in which political parties have been known to manipulate the redistricting process to benefit their own political interests.

If you’ve never heard this term before or thought much why you should care about it, you’re not alone. The guide below and the information provided on this page are here to help you get in the loop!