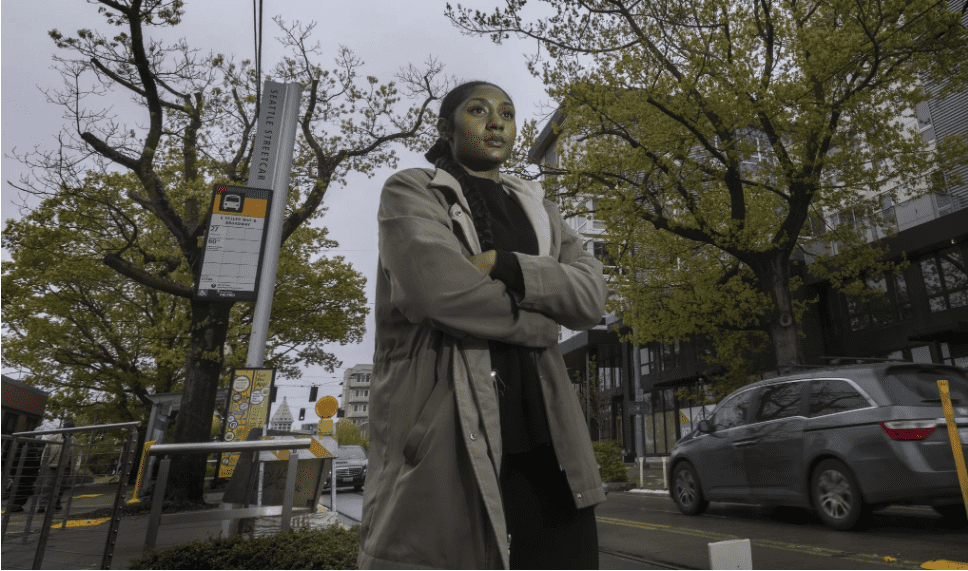 She sees a political border cleaving through a diverse neighborhood long known for welcoming people of all backgrounds. Since Seattle moved seven City Council seats to geographic representation in 2015, a boundary between council districts has run along Yesler Way between Interstate 5 and 12th Avenue, separating one part of Yesler Terrace from the other.

That means the neighborhood’s collective voice has been divided at City Hall, said Petty, a community advocate with the Urban League of Metropolitan Seattle who lives on the edge of Yesler Terrace. She’s working to increase awareness about a wonky but important process underway right now: Redrawing the council districts for the first time.

“It’s crazy how, when the council districts were drawn, the map split this area,” while respecting the cohesion of most other Seattle neighborhoods, she said, perched at a picnic table in Yesler Terrace Park with a sweeping view of Beacon Hill, Sodo and downtown. “It’s confusing to me.”

Petty is trying to find out what Yesler Terrace residents think about redistricting before a special commission adjusts the current map later this year. For example, would they rather be united with the Central District or with the South End?

The sprawling complex of aging row houses, a landing spot for multiple waves of immigrants and refugees, has been bulldozed to make way for a mid-rise community that includes new public housing and market-rate apartments, occupied by low-income families and high-income techies.

Personally, Petty feels a connection between Yesler Terrace and the South End, where many of Seattle’s people of color live. She moved there from the Central District when she was growing up. But other Yesler Terrace residents may feel differently, she noted.

“What’s most important in this process is to hear everybody,” she said.

Yesler Terrace is a relatively small part of Seattle’s political puzzle. But redistricting will involve changes in many areas and could alter the power balance at City Hall, with neighborhoods such as Georgetown and Madison Park up for grabs and with elections looming in 2023.

Voters approved the district system with a city charter amendment in 2013. The current map was drawn for the charter amendment campaign by a retired University of Washington geography professor using 2010 census data. The city’s population has grown unevenly since then, with some neighborhoods adding residents faster than others. Redistricting will ensure each council district contains about 105,000 people, per 2020 census data.

The new map will be drawn, as prescribed in the city charter, by a five-member redistricting commission that then-Mayor Jenny Durkan and the City Council appointed last year.

The work won’t wrap up until November, but the commission has already released four draft maps that demonstrate just how much Seattle’s political landscape could change.

Three of the maps would expand District 1 across the Duwamish Waterway to include Georgetown, which tends to support left-lane candidates in Seattle elections. That might help District 1 Councilmember Lisa Herbold retain her seat in 2023 against a more conservative challenger.

Three of the maps would expand District 4 across the Lake Washington Ship Canal to include Madison Park, including the Broadmoor gated community that tends to support middle-lane and conservative candidates. That might help District 4 Councilmember Alex Pedersen win reelection against a more progressive challenger.

Downtown will likely be carved between districts as District 7 loses territory. District 7’s population grew an astounding 42% from 2010 to 2020, thanks in large part to a residential construction boom in Denny Triangle and South Lake Union.

The draft maps are conversation starters, rather than serious proposals, cautioned Elsa Batres-Boni, an adviser from the Department of Neighborhoods. But advocates like Petty at the Urban League (a nonprofit that supports and advocates for Black people and other people of color) are digging in. The Urban League is part of a coalition called Redistricting Justice for Seattle, an affiliate of Redistricting Justice for Washington, which lobbies for city, legislative and congressional districts that account for people of color and tribal members.

Andrew Hong, the coalition’s coordinator, is keeping an eye on the Chinatown International District and Beacon Hill, he said, arguing both neighborhoods should probably remain in District 2, where many Asian American voters live.

The charter says the new lines should follow the existing lines, waterways and recognized geographic boundaries “to the extent practical,” while also taking neighborhoods into account. The districts should be compact and contiguous, the charter says. The redistricting commission plans to release a final proposal in August and solicit public comments in September and October before finalizing a new map.

Few people know Yesler Terrace as well as Kristin O’Donnell, who moved to the neighborhood in 1974. The area deserves a council member dedicated to hyperlocal concerns, like youth programs, crosswalks and shootings at a nearby homeless encampment, she said.

But Yesler Terrace hasn’t benefited much from the district system, said O’Donnell, 81. Shared between District 2 Councilmember Tammy Morales and District 3 Councilmember Kshama Sawant, the neighborhood should be getting extra attention, she said.

“The disadvantage is that you’re on the border,” she said.

Another longtime resident, Seraj Gemmechu, agrees that representation matters. He supported Mayor Bruce Harrell in last year’s election, he said, because Harrell showed up at a community event.

“You have to know your leaders, when you need anything to change,” he said, watching his children play at Yesler Terrace Park, steps from the apartment building where they live.

Most people with busy lives don’t have the time and wherewithal to track political machinations like redistricting, however. Gemmechu, 40, didn’t know about the process, he said.

That’s what worries Petty, despite attempts by the redistricting commission to spread the word via educational sessions with community organizations and via a sequence of public forums that starts Sunday. Redistricting Justice for Seattle will host its own listening sessions, including one on May 20, to supplement that outreach.

“We have to come up with something now that’s going to last for another 10 years, and our communities aren’t even aware,” Petty said.

Seattle’s redistricting commission has scheduled public forums for each City Council district, with virtual and in-person access. Details are available at seattle.gov/redistricting/how-to-participate.