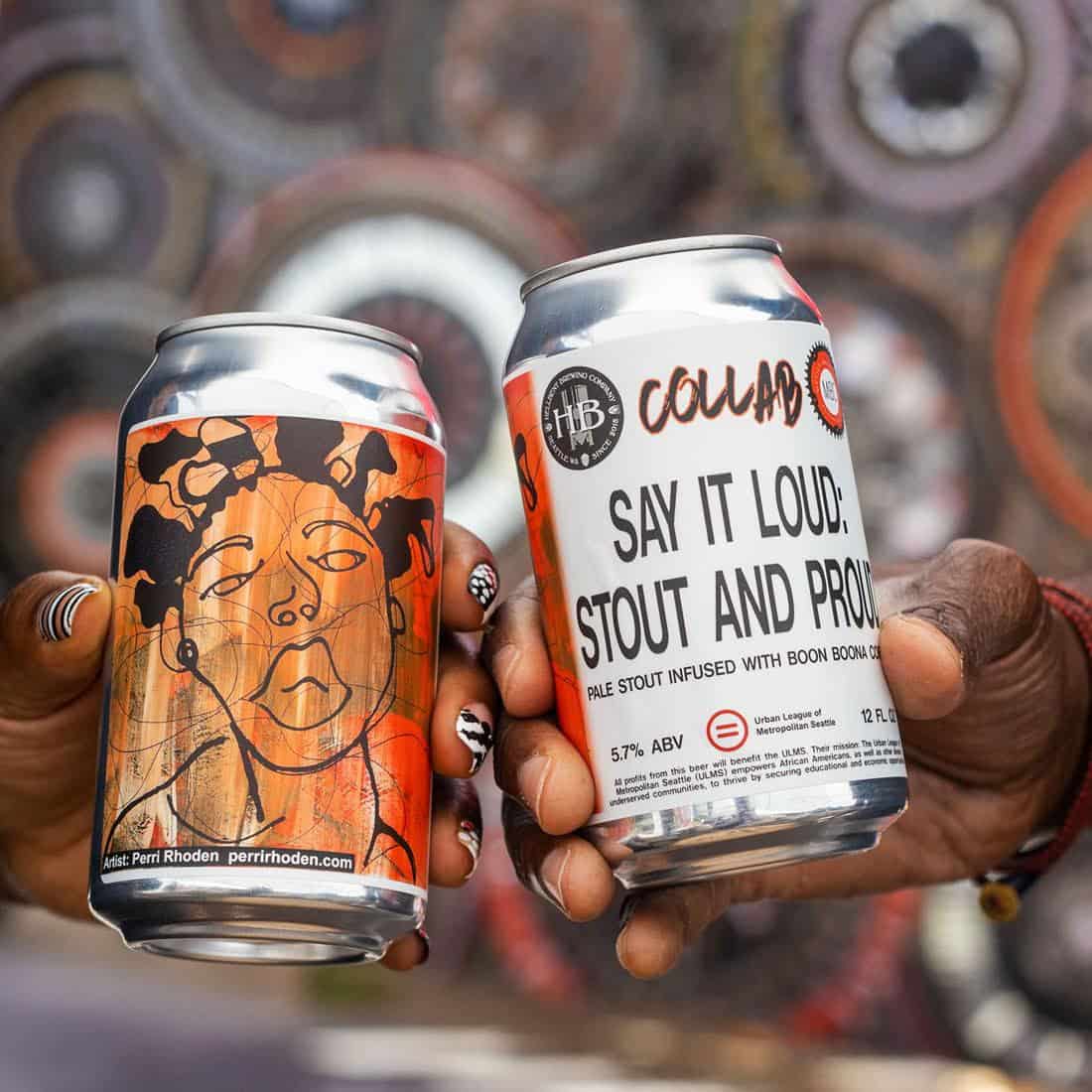 Hellbent Brewing Company is located in one of the most culturally and ethnically diverse neighborhoods in Seattle. On the streets of Lake City, you might overhear 22 different languages being spoken. That said, the company is aware that the craft beer industry is not exactly known for the same kind of diversity and recognizes the need to continually work towards making its taproom a place where all people feel welcome and comfortable.

“The murder of George Floyd and so many others gave that mission new urgency,” the company said in a press release. “We took to the streets with others yearning for justice, and we partnered with Metier Brewing Company to create a beer hoping to inspire and support the fight. This is our homage and contribution to the Black is Beautiful collaborative.”

Hellbent Brewing recently teamed up with Metier Brewing, Boon Boona Coffee, and local artist Perri Rhoden to create a beer to benefit the Urban League of Metropolitan Seattle. Say It Loud: Stout and Proud, a pale stout infused with Boon Boona coffee, will be released on Friday, August 14th at Hellbent Brewing’s taproom. Also at the Metier Brewing taproom in Woodinville and Boon Boona’s location in Renton.

The beer is described as “a pale-amber colored ale with a smooth mouthfeel and flavors that will confound the drinker. Using coffee from local roaster Boon Boona, this beer develops toasty molasses flavors. Then combined with chocolate additions after fermentation, you get a flavor you would think could only be achieved in a dark stout.”

Say It Loud: Stout and Proud is part of the Black Is Beautiful collaboration project, a nationwide effort spearheaded by Weathered Souls Brewing of San Antonio, Texas. Well over 1,000 breweries across the nation have joined in by creating their own version of the beer and by pledging to donate proceeds to local foundations that support police brutality reform and legal defenses for those who have been wronged.

“We believe great beer, paired with dialogue, connection, and action, can strengthen our community,” said Metier Brewing in a press release. “As one of the few black-owned breweries in the country, we know representation matters. From our kid-pet-and-event-friendly taproom in Woodinville’s Artisan Hill District to the vendors and charities we partner with, to the artwork on our beer labels, we are expanding the craft beer space so more folks see themselves reflected here and feel welcomed. We hope MBC inspires others to continually stop and consider who is missing or not represented. At MBC, we aim to play our part in growing a nurturing and inclusive craft beer community. Imagine MBC as My Beloved Community.”

To add to the character of the beer and the project, the collaboration team included Boon Boona Coffee, a company founded in 2012 in Seattle by Efrem Fesaha. “We got our start sourcing and distributing unroasted green coffee beans from Ethiopia throughout North America,” said the press release. “In 2016, we expanded into roasted coffee from Ethiopia and Rwanda. In 2019, we opened our brick and mortar location in Downtown Renton, where we roast and offer a cafe experience for our community. With coffee farmers across many African nations we look to develop long-lasting relationships and support the sustainability of their crops. Boon Boona Coffee is the bridge between African specialty coffee and you.”

To give the beer a richer identity, the collaboration team included local artist Perri Rhoden, a Seattle native that has been honing her creative practice as an abstract artist since 2012. Currently, she is emerging in the public art sector as a muralist. She has permanent and temporary art installations in Ballard, Downtown Seattle, and the Central District. More information about her current projects is detailed on her website.

All profits from Say It Loud: Say It Proud benefit the Urban League of Metropolitan Seattle (ULMS), an organization that empowers African Americans, as well as other diverse underserved communities, to thrive by securing educational and economic opportunities. It is the second-oldest civil rights organization in Washington and is one of the region’s essential economic first responders, helping families cope with challenges through a variety of programs designed to support and encourage self-sufficiency in all aspects of life. The Urban League of Metropolitan Seattle is a 501(c) (3) not-for-profit organization and is located in the heart of Seattle’s most diverse neighborhood, the Central District.